So, here is the video that I took of the St Paul Smoke Stack falling...

Wait for it to load - Action starts during minute 5, so forward to there (half-way point). I haven't had a chance to edit it down. 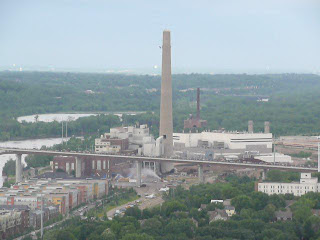 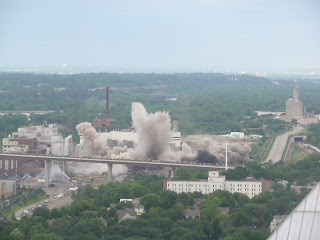 Well -- it was a crazy minute, but the Smoke Stack at the Mississippi River at the St. Paul High Bridge came falling down. It was described in the article as an implosion, but the way the video is shown, it seems very likely that they meant for it to tumble like a felled tree, as it did.

The smoke stack held a falcon box for several years, but that box was removed in January before the falcons returned from their winter journey.
Posted by Gary Allen Vollink at 10:07 AM 3 comments:

Concerning my previous blog post: Why Most Politics Is Radical

I had been thinking for the last several months about Nixon's "Silent Majority" [1] [2].

The silent majority is usually described as the "mostly conservative" bulk of people who are not easily swayed by politics. Some discussions have suggested that this majority is simply gone, that it doesn't exist. However, I take it that - even while Nixon called them a "mostly conservative" group in his campaigning, I don't think this was accurate in the political sense of the word. "Mostly conservative", I believe, means "leave me alone, and don't try to change too much."

I know the silent majority is alive and well. We are not in an era of extremes - not as extreme as the late 60s represented. That was Nixon's time - and the call for "normal" was powerful and uniting then. I don't know if that call can be made again easily.

It's not easy for politics to call for common sense, and simplicity. Worse yet that the last time a politician succeeded in doing so, we got Nixon and the Watergate scandal.

Email ThisBlogThis!Share to TwitterShare to FacebookShare to Pinterest
Labels: politics

I am planning on going to the office, and filming this from the tallest building in St. Paul. I Think it will be really cool to see. It's early though. I've never seen anything like this in person though.

I worry about "foggers and water cannons" obstructing my view though.
Posted by Gary Allen Vollink at 9:14 AM No comments:

Email ThisBlogThis!Share to TwitterShare to FacebookShare to Pinterest
Labels: boom

Click to play (doesn't work in some RSS viewers):

I went to a great summer solstice party last night, one of those parties where I only knew one person, but absolutely everybody was cool and easy to talk to. Had a wonderful time, and I got home really late.
Posted by Gary Allen Vollink at 5:50 PM No comments:

Email ThisBlogThis!Share to TwitterShare to FacebookShare to Pinterest
Labels: relaxation

Why Most Politics Is Radical

I firmly believe that most people are either, pretty much O.K. with the way most things are, or so apathetic to the possibility of change that they don't care.

Of this great majority, there is no reason to stand up and demand that things stay pretty much the same. Who would bother getting out of the house to vote for someone who doesn't think there's much to do.

The press is quick to seek out the exciting story, the political outsider that says something that sounds radical, but almost makes sense if you haven't thought it through. These radicals are the basis for our political system as it now stands. A candidate that says, "Let's try to carefully maintain what we already have," just doesn't make for a lead story.

There are political groups that regularly get press for saying poorly thought out ideas. Green Party candidates have a long list of decent ideas ignored after being quoted as saying something similar to, "everyone should be required to ride a bicycle to work." Besides the impracticality of this on an "everyone" scale, and the implications it would carry for public transportation, and those who don't know how to ride a bicycle - or physically can't ... This is the only idea that gets press. The one that is likely to alienate most of the voting public.

So we are left with picking politicians based on issues. In my view, most important issues, have very few points of debate. It is usually a case where the desired end-point is well agreed, but the road to get there is hotly debated. This is like the primary rifts between Liberals and Conservatives. In any case, when the desired end-point is the same, it's really hard for anybody to really care what the differences are. That's when the road becomes an attack point by the other side. Why does the road become an attack point? See "The Press" above.

The side affect of attacking the road is that the issue becomes side-lined for the debate about how one road is inherently evil, while the other is inherently good. Those that follow these debates closely, and the only ones who would bother commenting, are the same ones who believe that the issue "is" the road, and not the end-point. These people, by majority, are radicals.

What remains are the issues that are deeply entrenched, and unlikely to be solved by any single election or candidate. Abortion, Death Penalty, and War Ending. All are good for quick headlines, but all of these types of issues are the ones that a great deal of people have strong opinions about. In most of these cases, both sides are right about all of the issues that they talk about.

So, we are left with a system where only the radicals get heard, and only the skillful candidates that can express enthusiasm and empathy about nothing in particular are the most likely to be elected. How sad is that?

Win an election based on personality alone... a pretty radical idea, if you think about it. When that sort of person gets into office, the only voices they hear are the radical think tanks.

The majority will not be heard, because the Majority does not think things need to be radically changed, and so few think it's important to speak out in support of what they already have. The majority loses again.
Posted by Gary Allen Vollink at 3:03 AM 3 comments:

Email ThisBlogThis!Share to TwitterShare to FacebookShare to Pinterest
Labels: politics

A few times in the last few months, I've thought to actually go out of my way and click on a Web Ad. In every case, the web ad was non-traditional and insisted on doing something which got it blocked. Seems that web ads would be much more successful if they didn't demand dumb user behavior...

In all latest version graphical web browsers, a middle button mouse click is available to open the link in a new tab. On the ads I've been interested in, Middle-click is either unresponsive or gets the "flash engine" to attempt to open a pop-up. If I'm interested in clicking an ad, then it should behave like any other link. If it doesn't I'm likely to give up just that quickly.

In at least one of these cases, I was interested enough in what the ad was telling me, that I used a search engine to find the site, and loaded it into a separate tab. This means that the site I was using did not get the revenue for a click-through. Too bad for the web site... free advertising for the political candidate that I looked up anyway.
Posted by Gary Allen Vollink at 1:40 PM No comments:

Since I'm not in China anymore, that blog moved to http://gavollink-china.blogspot.com/
Posted by Gary Allen Vollink at 1:35 PM No comments: